This year has seen very strong returns in both the domestic and foreign stock markets.  Through the end of October 2017, the S&P 500 Index has increased 14.2%, the MSCI EAFE Index (a measure of international stock performance) is up 20.5%, while the MSCI Emerging Markets Index is up 32.8%.  But has the ride been a bumpy roller-coaster, as portrayed in the press, or a relatively smooth ride?

The data shows that 2017 has not been choppy.  In fact, 2017 has produced the lowest average annual volatility on record. 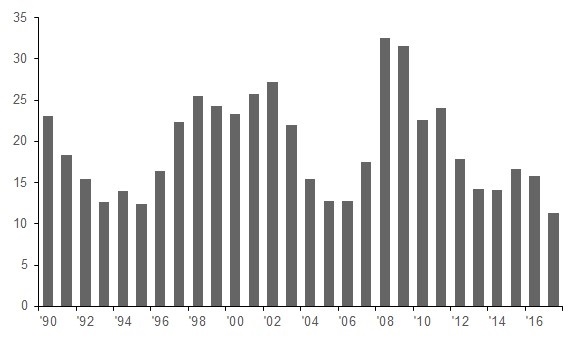 So, despite political turmoil in Washington, geopolitical tensions and nervousness about the length of an already very long bull market, equity performance remains robust.

Since the Great Recession of 2007-2009 the Federal Reserve has been in a prolonged period of monetary easing.  With the Fed pursuing their strategy of Quantitative Easing Parts 1, 2 and 3, interest rates have remained low and liquidity plentiful.   As a result, whenever the equity markets were hovering on the edge of negative volatility, cash was plentiful for investors to buy on the dips.

What will the balance of this year and 2018 hold?  Economic data is generally favorable, and valuations are not yet stretched.  However, instead of a period of easing monetary policy the Federal Reserve will be pursuing a tightening.  The Fed is currently allowing $10 billion of assets to mature each month; $6 billion in Treasuries and $4 billion in mortgage-back securities.   The monthly total will be increased each month until a figure of $50 billion is reached.  The $50 billion figure will be continued until the Fed substantially reduces the size of its balance sheet, currently at $4.5 trillion.

This tightening of monetary policy will likely come at a time of rising interest rates.  Expectations remain high that the Fed will raise rates later this year, and their announced policy is to raise them further in 2018.

Can the bull market survive and thrive despite these pressures?   Only time will tell.

All indexes are unmanaged, and an individual cannot invest directly in an index.  Index returns do not include fees or expenses. The S&P 500 Index focuses on the large-cap segment of the market, however, since it includes a significant portion of the total value of the market, it also represents the market.  The MSCI EAFE Index (Europe, Australasia, Far East) is a fee float-adjusted market capitalization index that is designed to measure the equity market performance of developed markets, excluding the US and Canada.  The MSCI Emerging Markets Index is a free float-adjusted market capitalization index that is designed to measure equity market performance in the global emerging markets.