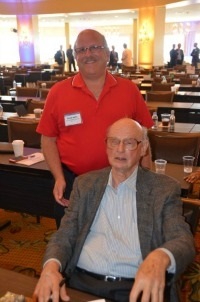 Why did I chose to make the first entry in our new Blog about financial pioneer Harry Markowitz?  Perhaps it is because all modern finance begins with Harry and his work.

As a child Harry was always interested in mathematics and physics.  When the time came to choose a subject for his dissertation in Economics at the University of Chicago, Harry decided to apply mathematics to the stock market.   For the first time the concept of risk was used to evaluate a portfolio of securities.   Harry’s work was first published in 1952 in the “Journal of Finance”.    Although it took some time, Harry was recognized for his contributions when he was awarded the 1990 Nobel Memorial Prize in Economics.

Maybe you would have trouble using calculus to solve for the optimal mean-variance portfolio as Harry did, but believe it or not, you do understand it.  The saying, “Don’t put all your eggs in one basket,” is a simplistic explanation.  (Despite what you might think by now the quote did not originate with Harry Markowitz.  According to Bartlett’s Familiar Quotations a version of this saying was first uttered by Sancho Panza in Don Quixote by Miguel de Cervantes [1547-1616]).   This concept is now known in the world of Finance as Modern Portfolio Theory and is taught at every university around the world.  Harry has earned the nickname as the “Father of Modern Portfolio Theory”.

In reality Harry showed that by choosing securities that have dissimilar movement in prices you can reduce the volatility of your total portfolio’s value.  A portfolio that sits on what is now referred to as the Markowitz Efficient Frontier is one in which the addition or subtraction of one security cannot lower the overall risk of the portfolio.

So you may be thinking that this is all well and good, but what does it have to do with me and my investments?  Believe it or not you are not only familiar with Harry’s findings, but you have used them in managing your own investments.  Have you ever used one of those colorful pie charts that guide you through how much of your money should go into each asset class?  That was Harry’s influence.   Do you realize you shouldn’t buy only 1 stock, no matter how much it seems like a can’t miss opportunity.  That’s Harry whispering in your ear.   Is your portfolio invested differently now that you are more concern about preserving your wealth than it was when you were in your 20’s and had no fear.  Yup, that was Harry too.

So the next time you hear someone on Wall Street selling a “get rich quick” idea, ask yourself “Would Harry approve?”