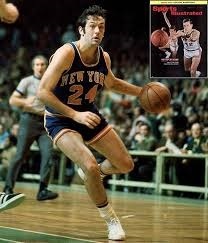 MY LUNCH WITH SENATOR BILL BRADLEY

During a recent conference I attended I was asked to join Senator Bill Bradley for lunch.  This was an unanticipated surprise to spend time with a man I have long admired for all that he has accomplished (see my blog post above).

During his presentation Senator Bradley was asked his opinion of how the current Congress has handled the Federal Debt, and Financial policy in general.  Bradley did not mince words showing his displeasure for the legislative branch’s inability to address its own spending.  Too much of legislation is focused on getting reelected, and not what is best for the country he continued.  Bradley, author of the 2012 bestseller “We Can All Do Better”, was asked how he thinks we are doing now.  His short answer— “Not better.”

During the presentation I asked Senator Bradley about the number of States that are 1 recession away from financial crisis, including our mutual home State of New Jersey.  Bradley responded that this situation is a clear example of the importance of electing qualified people who can provide good governance.  He bemoaned what he sees as the impending “Human Tragedy” that will occur to the millions of people who not only depend on the benefits of public pensions, but also the sustainability of the tax systems that will be overburdened by the need to make up for these shortfalls.

At our lunch table Bradley sought me out to continue his comments on the financial stability of many states.  He said he couldn’t go further on this subject in front of a national audience, as many people came from States in better financial shape than NJ, but my question was very insightful.  He shared with me that the last time NJ’s pension plan was fully funded was during Jim Florio’s administration in 1993.  He was very upset by the failure of the 5 Governors since, both Democratic and Republican, who spent today at the expense of those needing benefit in the future.  Clearly, I had hit a nerve with Senator Bradley.

Now if only current members of NJ’s legislature and its Governor (and those of other states in similar situations) could work together to manage revenues and expenses in such a way to meet the current needs of their constituents without sacrificing the needs of future generations they would show true leadership.  I’ll admit the job is not easy, but this is why the citizens have entrusted them with their votes.